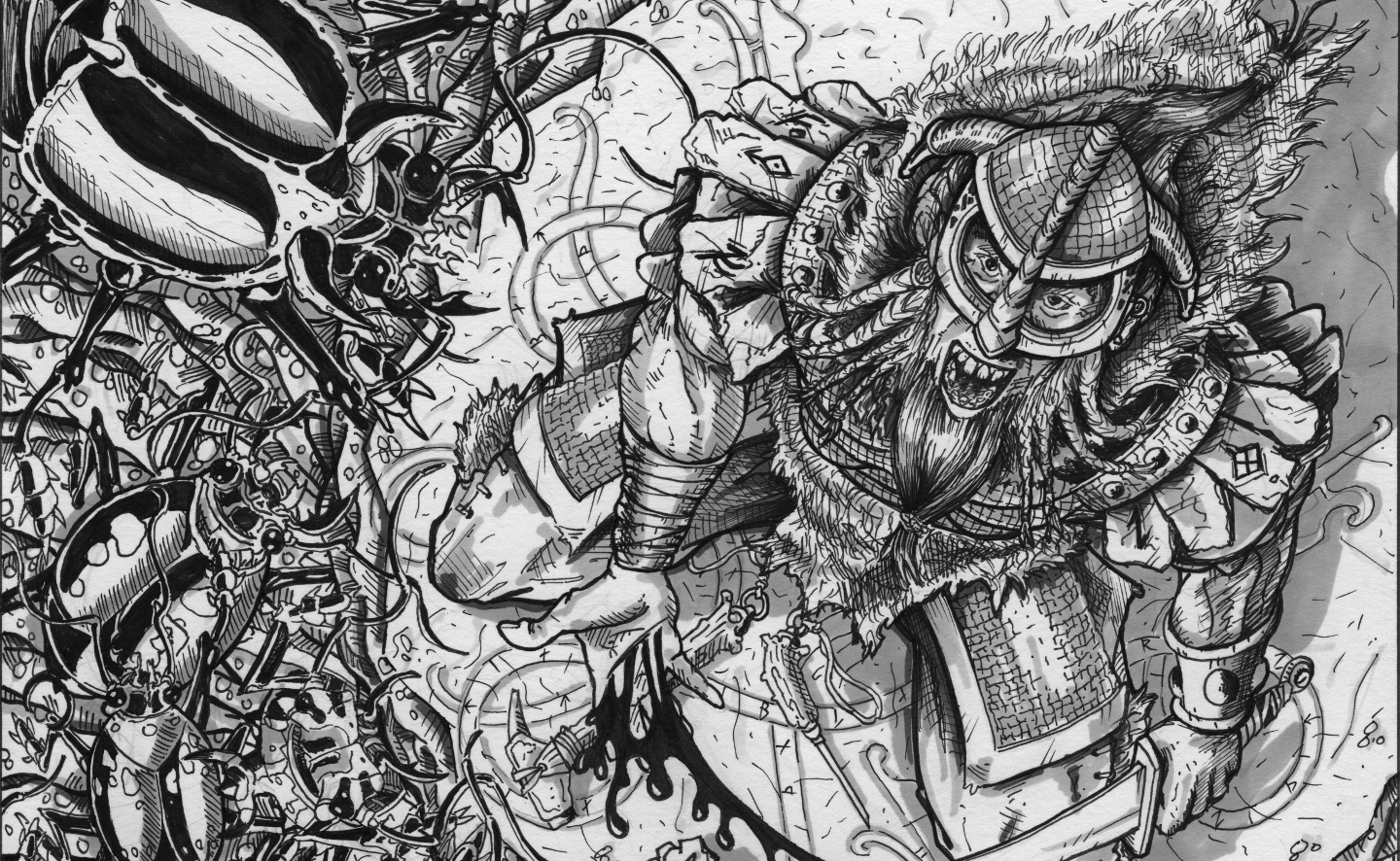 For those few of you who still check out this slow as hell blog, but also for my own amusement, here is a look at the Warlord's Palace illustration for www.hyperborea.tv and the new Beasts and Cannibals Kickstarter .

+Jeff Talanian was specific about wanting a full frontal view of this particular local in the "Anthropophagi of Xambaala" module. Really more of a ruin that a palace, and he wanted it seen from a distance without much in the way of surrounding landscape save for the immense dunes that have collected around it.

I went straight away to google the type of architecture that he had mentioned in his write-up and the various questions I asked.

This is the first iteration a full sized sketch. Sometimes I do this, sometimes its just thumbnail sized pencils.

You can see the guidelines with in this one too. I wanted the structure to be slightly higher than the horizon so if you look closely the walls slant slightly in as you get higher. It is ever so subtle and creates a good effect of a large structure looming out ahead of the viewer. Maybe I didn't pull it off quite as well as it sound in my head, but hey.

Here is the final original drawing.

There were problems though, for the most part the publisher loved the entire structure, but the large sand dunes behind and the shadows in the background had to go. I agreed that I wasn't sold on the shadows, and from my original reading I had not caught that the landscape around was barren; thus no dunes.  I went back and forth at this point deciding if I could still realistically keep the sun in the background. Remembering though that this is Hyperborea, I knew that it had to be low on the horizon, as it almost never rises above.  It would just depend on whether aesthetically it would be pleasing for the drawing in the end.

Thus back to the drawing board again, and this time I some work to do. I lightboxed over the basic lines of the structure on final board and proceeded to pencil in the building.

Here you can see I increased the size of the "Red Giant of Hyperborea", removed the looming dunes, and added a few "desert plants" roughly in the foreground. You can see more of those guidelines here.

This being the final pencils I "fleshed" this out, making sure that all those sand dune shadows played right.

The front entrance was purposely off center in the building, so that was made more obvious too.

Now, I dont find that I always start in the upper left of a drawing, I usually skip around a bit and work as it works, this time, I found that I started here, so that I could ink those dunes in without putting my hand in the wet ink. There is quite a bit of ink going down here, and it stays fairly wet for a while, especially where it is brushed. BTW it is rapidiograph ink with a W&N Series 7 #2 brush. I also used various sizes of Sakura Microns too.

I was not sold on the plants in the foreground, but I can work with that later.

Here I have gotten some more work done, and the sun is taking shape. I was going for a different look with the "red giant" but at this point I was not sure it was going to turn out as I had envisioned.

The details here on the building were thrilling, I loved the towers, and spires that were broken or crumbling. The building shapes in the background were looking good as well.

A shitty photo here, but you can see that the inking continues. The shadows on the dunes were driving my eyes crazy trying to keep them consistent without having black on black abberancies.

The sun is taking shape as well, overall at this point I am quite satisfied with what we have here.

Again sort of a crappy photo, but here we see the finished artwork the foliage in the foreground was changed to something that I could live with and the path way was fleshed out. I actually had to google footprints in the sand to see how the low sunlight would affect them. Overall quite pleased, and more importantly the publisher accepted it. Cheers!

Thanks for looking, comments always welcome. I shall endeavor to post to this thing more often in the coming months.